Look at this mushroom I found walking around our cottage.
I thought is was so neat. 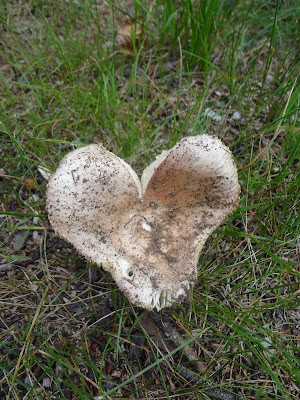 Wayne bought a new chainsaw to cut the dead or overhanging branches off of the trees. Funny thing is it didn't work very well. Until him and his dad realized that the manufacturer put the blade on upside down, lol.
So after they cut the brush they burned it. There sure was a lot of smoke. I was surprised a water bomber didn't fly by.
So after the brush was burned we put on some fire wood and toasted some marshmallows and had some smores :)

We were going to take the dock out, but it was so chilly today.
So we decided to wait until next weekend.
I hate taking out the dock, that is the first sign that summer is coming to an end :(

Hope you all enjoyed your Sunday.