Altered Clipboard and our cat with Alopcecia

I will start with a project I did at the crop I went to yesterday.
This is a project I made for Ashley's friend Michelle. She is moving into her own apartment in July and asked if I could make her something to put a grocery list on for her fridge. At first she wanted a outdoors theme. Then changed her mind to an East coast theme. 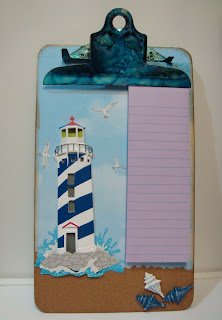 I used fine sand paper for the sand. It took me forever to find a lighthouse. This one has so much dimension to it. I used alcohol ink for the clip. I wanted to change the colour and paper just wasn't going to cut it. 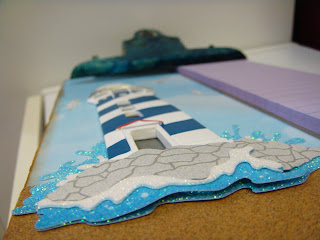 For the note pads I just cut a regular one in half with the exacto knife. 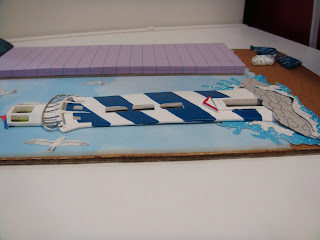 Just a question here. Can a cat have alopecia? Our cat Rose has been showing some major signs of hair (or I should say fur) loss. She is 13 yrs old and eats, sleeps and uses her kitty box. She doesn't show any other signs of being sick.
Rose is an indoor cat. But lately the girls have been carrying her outside (to get some fresh air they say). I don't know if that was such a good idea, and I was correct. Now she meows at the door. And if someone goes outside she tries to sneak out.
I just worry that she does sneak out when we are going to camp. She couldn't survive outside. If a bird flies by and startles her she runs back in the house. 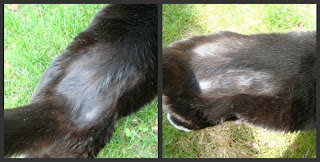 Her are some pretty flowers that came up. I don't know what they are called though. I am not a gardener, but I do still appreciate looking at them. 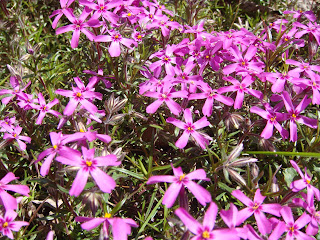 Hubby and I went to the "Pit" to get some topsoil for my flower beds. We forgot to bring the tops for the containers that we were hauling it back in. So I only got one bucket. Oh well.
I pulled dandelions. We bought the Fiskars weed popper thingy. We tried to get one last year and they were sold out every time. So when they came out in April (with snow still on the ground) hubby scooped one up.
It is so fun to use this thing. You put the prongs in the ground in the center of the weed, then step on this solid lever, then lastly, you use it like a shot gun and put the weed in the weed basket. It is so fun.
Hubby and I ran to Home Depot for some screws for my racks to hold my punches on. I had bought 5 racks and hubby thought that 3 was enough "Wrong" LOL.
For some reason hubby didn't think that the screws that we bought would work. Funny how they worked for the other 5 he put up last year...DUH.
Well we got those suckers up. Tomorrow I (and when I say "I" I mean him) will put up the last 2 racks and two shelf units that my dad made to display my girls Beanie Babies. They will soon display my stamps :)
Watched Survivor tonight. I so wanted Russell to win. I knew he wouldn't even get a vote though. But he worked his butt off to get to the end. See hard work doesn't always pay off kids LOL.
Hope you had a good weekend.
Tracy
Posted by Tracy at 10:52 PM