We woke up early (in my opinion) to get going to our camp/cottage this morning.
Only hubby, Ashley and I went up. The other 2 stayed home. Kristy doesn't want to go up until school is over.
Hubby brought Ashley and I breakfast from McDonald's. He bribes us with this so we get up early teehee.
Ashley and I wanted to paint her and Kristy's room this weekend (they share a room at camp). All the rooms are panelled. I hate panelling, every place I lived has had panelling.

OK let the painting begin.
This is the paint colour that Ashley chose. Pretty. It reminds me of the beach.
Next to it the panelling and the bunk beds.
Then my edging. Luckily I didn't have to go down every indent. Ashley did the rollering (spellcheck says that rollering isn't a word, I invented a new word yeah me). 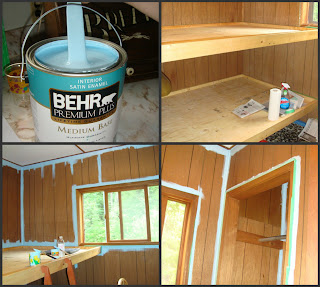 Here is the finished paint job. Oh you may ask "Is that paint on the trim"? The answer to that would be yes. We taped off the panelling and was very careful not to paint it. But then came to the conclusion that the trim would look better painted white. So I guess Ashley thought why be careful and hit the trim big time LOL. It took 4 coats to cover this nicely.
Oh you can't see the funky carpet in here. It is made up of 12x12 carpet samples. And I might add not pretty ones. They are orange, red, green shag LOL. It was in the living room but my FIL and MIL changed it to wood flooring years ago. When the kids were younger they would play the colour game and jump from colour to colour, ya not so cute anymore LOL.
So next time we go up I will bring up white paint and paint the trim, ceiling and door. I will also bring up some new flooring. Not sure what type though. 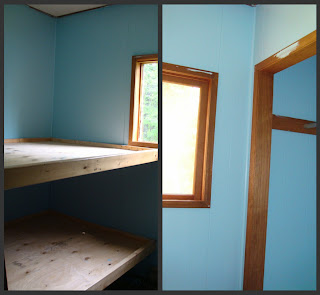 Wayne and Joy (FIL's wife) went swimming this weekend. I think that this is the earliest that they have gone swimming. The water temp. was 22C/70C. Summer temperatures. NICE. Ashley went in up to her knees. 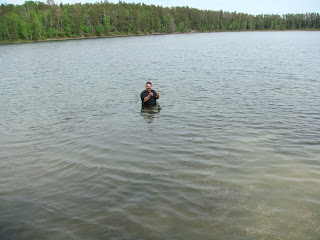 The pollen was awful this weekend. Hubby said it was worse last weekend. I know it looks nasty. The pollen was only at the edge of the beach. Hubby swished it away so Ashley would get in the water. 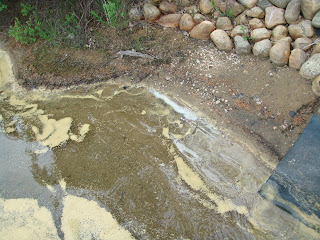 There were a lot of dragonflies out this weekend. Ashley saved a few from the water. They would also land on her. I called her the dragonfly whisperer. LOL.
See this poor little guy lost part of his bottom wing. He did somehow fly away. Ya that is blue paint on Ashley's arm teehee. 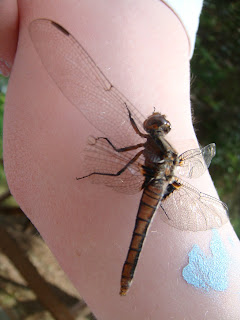 Watched some shows and a movie then went to bed.

Hope your Saturday was a good one.